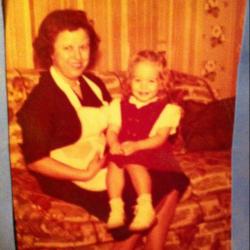 Mama was so funny.  She told jokes really well. Unless she forgot them.  Or got the facts mixed up.  But regardless, she was funny.

Her heart was the biggest I have ever known.  When she led my Brownie troop back in 1960, she taught us how to make favors for the meal trays at Cardinal Hill Children’s Hospital.  We cut out the silhouette of a cardinal from red construction paper, put a horizontal slit in the side, then cut a rectangle of paper and folded it accordian style; and inserted it through the slit, so that the bird had 3-D wings.  It was really a cute little gesture, and brightened the lunch trays of severdal hundred crippled children that day.

We donned our Brownie uniforms and carpooled to the imposing old brick building, perching high on a hill off of Versailles Road and Mason Headley Road where it gazed down over what later became Cardinal Valley Subdivision.  It was freezing cold as we piled out of station wagons and cars with several other mothers in attendance.  We were well rehearsed in how to stay in 2 lines and behave as we visited the hospital to sing Christmas carols and brighten the faces of the children who were receiving treatment there.  As Mom led us from room to room, her animated face, exaggerated movements and that wagging index finger marking time to the acappella music brought bright smiles to more than a few.

The way she could widen and roll her eyes brought laughter to the lips–and joy to the soul. All 4 ft 11 1/2 inches of her were proud to reach out to each little heart, speaking with her smiles and comedic gestures to love each one in turn.

Not such a big deal, you say?  You weren’t there.  It’s as if someone turned on the lights in room after room as she strolled through, bringing the love of Jesus to child after child.  It impressed me then, a little girl of 7.  And the memory of it still impresses me today, at 63.

Someday, when I meet you in heaven, I’ll introduce you to Mama, and if you’re really lucky, I get her to sing for you “This Little Light of Mine.”

3 thoughts on “My Mama Sang”